Deep in Borneo’s rainforest, among the 10,000 species of plants and a canopy of trees, one might hear the growl of a Clouded leopard, the howl of an orangutan, or the call of the Rhinoceros hornbill. While the animals are illusive to the eye, their sounds echo through the forest; which is exactly why Zuzana Buřivalová, an assistant professor with the Nelson Institute Center for Sustainability and the Global Environment (SAGE) and the Department of Forest and Wildlife Ecology, uses soundscape to study biodiversity in rainforests around the world. Now, she is sharing what she has learned through an illustrated children’s e-book called, What does the rainforest sound like? A Sound Forest Lab Story. 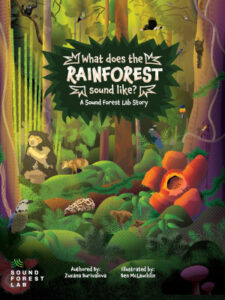 This book includes detailed illustrations and the accompanying sounds of common as well as rare animals heard throughout the Borneo rainforest. Meant to be an eye-catching and ear-catching, educational tool, the book is ideal for ages six to 12, but will capture the attention of anyone interested in the sights and sounds of the rainforest.

“I had thought of the idea to make an illustrated book some time ago, but I felt it would be great to do that as a lab project,” shared Buřivalová, who leads the Sound Forest Lab. “Working on a book together was a fun team building exercise and it also became something to keep us motivated during the pandemic. We worked together on the storyline, with some students looking at which soundscapes to include while others worked on the animals we should include or the project logistics. It was a fairly unusual project for a research group, but very rewarding.”

While Buřivalová and the students in her lab developed the story, they enlisted the help of an Indonesian wildlife expert, Yaya Rayadin, as well as the skills of designer and illustrator Ben McLauchlin, who graduated this year from the visual communication design program at the Rochester Institute of Technology. McLauchlin has an undergraduate degree in environmental studies from SUNY Binghamton University and has experience with environmental design and illustrations.

“Ben is a fantastic visual artist,” said Buřivalová. “I saw the illustrations he made with Jessica Hua’s lab, and I thought he was a perfect match for our project. His illustrations are charming, and they have a lot of detail and that was something I really wanted – there is a lot of depth and detail in the book. You won’t see everything the first time you look at the page. You will be able to come back and see something new every time or notice a new tail or wing hiding behind a tree.”

In addition to the graphics and the soundscape, Buřivalová also wanted to ensure that the book was accessible to not only those in the United States, but primarily those living near the Borneo rainforest. So, she enlisted the help of Sita Dewi, a lecturer at Universitas Multimedia Nusantara in Tangerang, close to Jakarta, who helped them to create a version of the book in Indonesian.

“We are using the rich rainforest soundscapes to measure biodiversity and monitor how forests are changing, but I think it is also important to make those soundscapes available to people who can’t go easily to the rainforest,” Buřivalová said.  “Even in Indonesia, many children might not have the opportunity to visit a rainforest, and our book lets them experience what the rainforest sounds like throughout the day.”

While the book is an immersive experience that introduces the reader to the sights and sounds of the Borneo rainforest, it also offers insight into conservation and the impact of human life on the rainforest.

“My research is focused on using the soundscape, or the sounds that animals make, to measure the impact that we humans have on the rainforest. We can measure, for example, logging impacts or whether conservation projects are actually helping animals to come back,” said Buřivalová, who uses new tools such as bioacoustic recorders to capture these sounds and then analyzes them to learn what, and how many species are present as well as how those numbers differ as humans use the forest. “The Indonesian part of Borneo is especially interesting in terms of the soundscape. This is not only because it has so much intact rainforest, but also because there are a lot of threats to this forest. Unfortunately, Indonesia has one of the highest rates of deforestation.”

Buřivalová hopes that by sharing this soundscape story, children will not only learn about the animals present in the rainforest, but also about the threats to the forests and what can be done to mitigate these risks.

“Part of our lab’s mission is to use soundscapes to educate. Worldwide, many children know animals such as lions or gorillas, but it’s not common to have a storybook about a Clouded leopard or the Sunbear,” Buřivalová said. “The way I became interested in rainforests to begin with was through books when I was very young. This motivated me to create a book because I know what kind of impact it can have on one’s life.”

While the book was published on September 17, 2021, Buřivalová and her lab are already considering how they can expand upon this book and reach new audiences who may be interested in soundscape and conservation.

“The students in my lab come from very different places, including Brazil, India, and Benin,” Buřivalová said. “So, our vision is to have an illustrated soundscape book like this from all continents with rainforests.”

The book is available on the Sound Forest Lab site.

We invite you to learn more and support the Nelson Institute Center for Sustainability and the Global Environment (SAGE).