The Nelson Institute draws its name and inspiration from the late Gaylord Nelson, a Wisconsin native who helped make environmental protection a top national priority in the latter half of the twentieth century.

Born in 1916 in the small town of Clear Lake, Nelson set his sights at an early age on a career in politics. He was determined to become a progressive in the mold of Wisconsin’s “Fighting Bob” La Follette, and he succeeded. Along the way, he also made his mark as one of America’s most outspoken and effective environmental advocates. 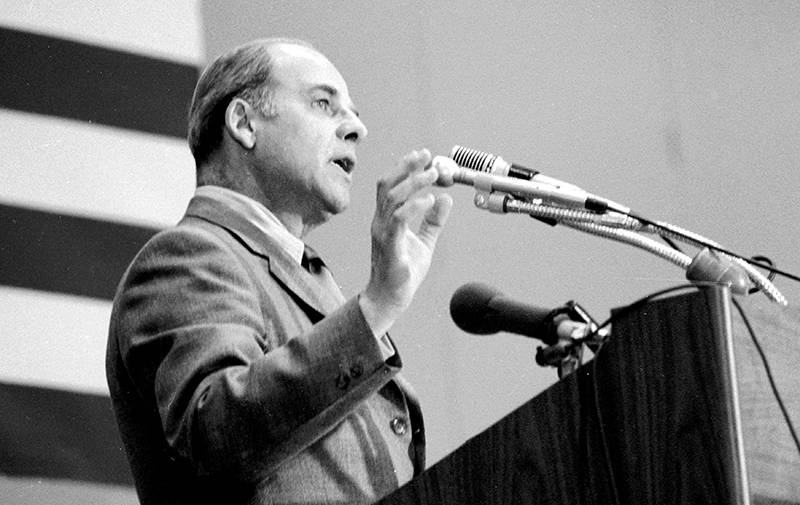 After earning a law degree from UW-Madison in 1942 and serving in the Navy during World War II, Nelson rose through the state’s political ranks. As a state senator from 1949 to 1959, then as governor from 1959 to 1963, he repeatedly called attention and applied public policy to issues of land protection, wildlife habitat, and environmental quality.

Nelson’s most far-reaching accomplishments occurred on a larger stage. Elected to the U.S. Senate in November 1962, he became its leading environmentalist. He championed landmark laws including the Wilderness Act, the National Trails Act, the National Wild and Scenic Rivers Act, and the National Environmental Education Act. He also introduced the first federal legislation to mandate fuel-efficiency standards in automobiles, control strip mining, and ban the use of phosphates in detergents as well as use of the pesticide DDT and the defoliant 2,4,5-T.

Throughout his career, Nelson respected and befriended colleagues on both sides of the political aisle. His integrity and determination, combined with his personable, folksy style, enhanced his success at building bipartisan support for his initiatives.

Nelson is best known as the founder of Earth Day. An astonishing 20 million Americans participated in the first observance on April 22, 1970. American Heritage magazine described the event years later as “one of the most remarkable happenings in the history of democracy.” Today, Earth Day is an annual observance that has grown to a week or more in many locales.

Upon leaving the Senate in 1981, Nelson continued his tireless campaign for environmental stewardship as chairman, then counselor, of The Wilderness Society. In frequent public appearances, he advocated protecting America’s national forests, national parks, and other public lands from harmful development. He also called for population control and environmentally sustainable development.

Nelson’s efforts on behalf of the environment brought him widespread admiration, affection, and acclaim. In 1995 he received the Presidential Medal of Freedom, our nation’s highest civilian honor. In 2002, the Institute for Environmental Studies at UW-Madison was renamed in his honor.

Gaylord Nelson died in 2005 at the age of 89. His commitment to environmental stewardship and social justice lives on in the Nelson Institute in many ways: