After more than twenty years of experience in land conservation and a career that spans many disciplines, Nelson Institute alumna Heather Shumaker has gained a unique perspective on environmental challenges. It’s a perspective that she shares through her books on environmental topics as well as through speaking engagements and presentations much like the one she gave to Nelson Institute professional graduate students in January. 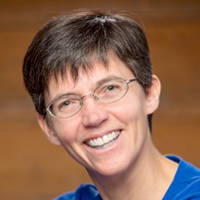 Shumaker, who began her career in land conservation and transitioned to writing lives by this advice and shared her story with Nelson students in an effort to inspire them to connect with conservation through whatever talents they possess.

Shumaker shared that her academic journey began at Swarthmore College where she focused on writing, sociology, and anthropology, but she had a passion for the environment and knew she wanted to attend graduate school in the future. The University of Wisconsin-Madison’s Nelson Institute Land Resources Master’s program was at the top of her list, but she wanted to gain some experience before applying.

“At the time, I knew I wanted to get my hands dirty and try out some jobs in the environmental movement before going to graduate school,” Shumaker said.

And get her hands dirty she did, joining a team of waste management technicians as the first recycling crew in the South Pole. While Shumaker enjoyed the experience, she knew she was ready to go back to graduate school and decided to send her Nelson Institute application directly from Antarctica.

“I knew when I went to Antarctica that Madison was my top choice and I knew it would be difficult to be accepted so I brought the application with me and postmarked it from Antarctica because I thought they [Nelson Institute] would at least be bound to open the envelope even if they didn’t let me into the program,” Shumaker said. “That strategy seemed to work because when I arrived in Madison to begin classes Nelson Institute staff immediately recognized me as the person from Antarctica.”

During Shumaker’s time with the Nelson Institute she focused her research on land protection strategies with the goal of aiding the Nature Conservancy of Wisconsin with its land conservation projects.

“I wanted my thesis to be relevant to the real-world so I designed something that would be relevant to the Nature Conservancy Wisconsin,” Shumaker said. “So I focused my work on the Baraboo Hills to look at land development and land protection strategies to help prevent forest fragmentation.”

While Shumaker was passionate about this work she also missed writing, so to put herself through school she began writing scripts for Earth Watch Radio, which was a partnership between Sea Grant and the Nelson Institute.

“That was pure joy,” Shumaker said. “I did that for two years when I was a student and I think in some ways it helped me to get the ability to translate complex scientific ideas for a general audience.”

After graduating from the Nelson Institute, Shumaker began working for a variety of conservation organizations.

“I felt when I landed my first job after graduate school that I had to use everything I learned at the Nelson Institute right away,” Shumaker said. “I took a wide range of classes and it all came into play. Bringing my Nelson Institute background with me helped us to tackle huge projects beyond our scope.”

While Shumaker worked for several notable organizations, she spent nearly a decade working with the Grand Traverse Regional Land Conservancy before determining that the desire to write was too strong to deny. 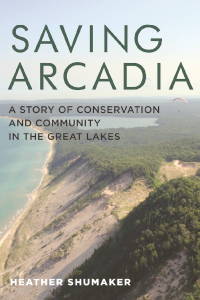 “I’ve wanted to be an author since I was four so I was always looking for a way to get writing into whatever I did,” Shumaker said. “I’ve always adored writing, but felt a sense that the environmental issues were just so pressing that I shouldn’t indulge in writing. I felt I needed to do something more, but I couldn’t deny the call to write so after graduating from Nelson Institute I worked about ten years in land conservation before I figured it was a good time to try out the writing thing and one of my first projects was about land conservation so it all connected.”

In fact, that writing project became Saving Arcadia, a nonfiction book about Great Lakes land conservation that focuses on the Grand Traverse Regional Land Conservancy where Shumaker worked for many years. The book, which follows Michigan residents and the conservancy working together to conserve sand dunes from a powerful corporation won the Michigan Notable Book Award and the Next Generation Indie Book – Environment category.

“He bought a copy of my book and sent me a poem about how inspired he was reading it and then sent a check for $50,000 to the land trust mentioned in my book,” Shumaker said. “We’ve had other people send checks as well and these gestures are very, very meaningful because you’re never truly done saving land. It happens through the hearts of people and legal means. It’s an ongoing process of relationships.”

“Find the good news and keep your spirits up because if you go into the environmental field you already know how important it is” Shumaker said. “All human and non-human species’ lives are at stake so if you’re going into the field you know that, but the doom and gloom can get really heavy. So, reminding yourself that there have been tremendous successes can be essential to keep you going.”