The editorial board at Edge Effects is celebrating a major milestone during spring semester 2022. Less than eight years after launching in 2014, the digital magazine and podcast hit one million total page views on its website, edgeeffects.net.

“Here we are, almost eight years later, with Edge Effects—an entirely graduate student–run endeavor, I might add—still going strong,” reflects Adam Mandelman, one of the magazine’s founders and the first managing editor. “That alone is a significant achievement in a world where digital publications are launched and scrapped with a rapidity reminiscent of mayflies.”

The magazine, which started as the dream of a group of students, has since grown to a professional publication averaging 20,000 views per month. “I remember one of the very first conversations about the ‘grad student blog’ that would become Edge Effects,” says Rebecca Summer, managing editor for the 2017–2018 academic year. “This was in a meeting of [Emeritus Professor] Bill Cronon’s graduate students [in 2014]. Who could have imagined it would blossom into such a robust and respected space for public scholarship?”

Since its inception, Edge Effects has been produced by graduate students in the Center for Culture, History, and Environment (CHE), which is housed in the Nelson Institute for Environmental Studies. Throughout the magazine’s growth, its general structure has remained the same: graduate student volunteers comprise the editorial board, who shape the magazine’s content and edit posts for publication. One graduate student serves as the managing editor, which involves maintaining the publication calendar, guiding the editorial process from start to finish, leading meetings, managing the social media accounts, and overseeing all facets of production.

Rachel Boothby, member of the founding editorial board and managing editor from 2016–2017, says that one of the major achievements of her tenure was working with former managing editors and CHE leadership to transition the volunteer managing editor position into a paid project assistantship, thereby “helping to make the magazine more sustainable and provide an avenue of support for CHE graduate affiliates.” Former managing editor (2017–2018) Rebecca Summer reports that she was the first to be compensated financially for her work. “I don’t think it would be too dramatic to say that Edge Effects would look very different today if we hadn’t made that change.” 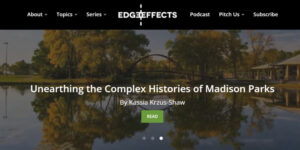 Over the years, the magazine has published hundreds of essays, creative works, and multimedia pieces about topics in the environmental humanities, with contributors ranging from graduate students and tenured professors at campuses across the world to artists and activists working in communities all over the country. Some of the all-time most-viewed posts on the site emerged in its early months, including “The Anthropocene: The Promise and Pitfalls of an Epochal Idea” by Rob Nixon, then Rachel Carson and Elizabeth Ritzmann Professor of English at the University of Wisconsin–Madison, and editor Brian Hamilton’s photo essay on Davis Island. “One day I noticed Brian’s piece was consistently (and significantly) topping our views and it turned out that it was being passed around a community of Civil War history enthusiasts,” remembers founding editor Adam Mandelman.

Reaching public audiences outside of academia has always been part of Edge Effects’ mission and ethos. The editing process that the board has carefully developed over time focuses on helping scholars write for a general audience. There is also a lot of additional behind-the-scenes work to prepare pieces for digital publication, says former managing editor (summer 2017) Brian Hamilton. “[We would ask ourselves] How could we take a post and package it with a grabby yet responsible headline, an eye-catching featured image, a well-crafted Tweet, and other promotional copy to draw in the readers it deserves? Academics are rarely if ever offered such immediate, frank feedback on our work.”

One of the magazine’s big successes has been the launch of several themed series, which continue to draw readers to the site. Addie Hopes, managing editor from 2018–2019 and 2020–2021 and current reviews editor, considers these series integral to Edge Effects’ growth. “As managing editor, I took part in developing three exciting series that brought new voices and new perspectives to the magazine: the Plantationocene, Indigenous Lands and Waters, and 2020 Visions: Imagining (Post-)COVID Worlds,” she says. “I’m still so grateful for the monumental efforts of the many editors—and the contributors, of course—that went into making these series the successes they continue to be on the site.” The magazine is launching a new series this semester called Unpure Imagination, which features essays and creative works that engage with and challenge ideas of purity and toxicity in environmental thought.

The podcast has also been a prominent feature of Edge Effects’ output. In November 2021, the podcast published its 100th episode on iTunes. This semester has seen the launch of Ground Truths, a new six-episode podcast series funded by Wisconsin Humanities that “highlights environmental justice issues across the diverse communities and landscapes of Wisconsin, from Milwaukee to the Northwoods.” The current editorial board has been excited about featuring more audio content on the site, including the recent launch of author narrations to accompany select essays. The first of these was Daegan Miller’s essay “Badwater,” an excerpt from the book series Kinship: Belonging in a World of Relations that was recently published on Edge Effects with original audio.

“Our goal was always to produce intellectually engaging content that was approachable and interesting to a non-specialist reader,” says Nathan Jandl, former managing editor (2015–2016) and now assistant director of the UW–Madison Office of Sustainability. “That the magazine has flourished and has now passed the million-views mark is testament to that work and those values.” He recalls that Danya Al-Saleh and Mohammed Rafi Arefin’s 2014 essay responding to the murders of Michael Brown and Eric Gardner was a watershed moment for the magazine, along with roundtable conversations about the Flint water crisis and the environmental history of Chernobyl upon the 30th anniversary of the nuclear accident.

In addition to becoming a respected digital publication in the field of environmental humanities, Edge Effects offers graduate students a unique opportunity for professional development. “More than any other experience in graduate school, my time at Edge Effects taught me how to give meaningful and constructive feedback—a skill I have not stopped using since!” says Rachel Boothby, who works for a company based in California that creates and operates responsible sourcing programs for agricultural supply chains.

Brian Hamilton, former managing editor and now chair of the Department of History and Social Science at Deerfield Academy, echoes this sentiment. “The diverse digital and public humanities skills I developed while an editor contributed [many] lines to my resume,” he says. “I was delighted to see the range of jobs I felt qualified for when I went on the market.”

The magazine has also cultivated a strong community both on and off-campus and stands as a model of collaborative work in the humanities. “My favorite thing about Edge Effects is the team, how every piece is truly a collaborative and collective effort,” says Laura Perry, former managing editor (2019–2020) and now assistant director for research and public engagement in the Center for Humanities at Washington University. “I found out that I far and away preferred this model of intellectual community to the usually solitary experience of scholarly research.”

“I am proud of this accomplishment and indebted to the work of the amazing graduate student editors who came before me and built this foundation,” says Richelle Wilson, current managing editor. She serves on the board alongside ten other students from a wide range of disciplines: Kuhelika Ghosh (English), Carly Griffith (Geography), Addie Hopes (English), Justyn Huckleberry (Nelson Institute), Ben Iuliano (Integrative Biology), Marisa Lanker (Nelson Institute), Juniper Lewis (Anthropology), Weishun Lu (English), Rudy Molinek (Geoscience), and Clare Sullivan (Geography). The editorial board’s generosity of time, labor, and talent is what keeps the magazine going.

What started as a seed in 2014 has blossomed into a sprawling ecosystem of ideas. Cheers to the ever-expanding community of Edge Effects editors, contributors, and readers! Here’s to one million more views in the years to come.

Learn more about the Center for Culture, History, and Environment and how you can support the program.