Nelson Institute Center for Climatic Research associate scientist Feng He is among the researchers highlighted in a new study published in the journal Nature Climate Change. He and Oregon State University paleoclimatologist Peter Clark describe a new model simulation that matches the warmth of the last 10,000 years. And they did it by doing away with the trigger most scientists believe stalls or shuts down the Atlantic Meridional Overturning Circulation (or AMOC). Climate scientists count the AMOC among the biggest tipping points on the way to a planetary climate disaster. 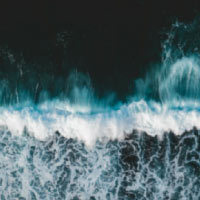 He shared that researchers are revising their understanding of the relationship between AMOC and freshwater from melting polar ice, “It’s built into many models,” He says. “Future global warming from increasing carbon dioxide in the atmosphere melts sea ice, and the freshwater from the melting ice is believed to cause the AMOC to weaken.” Further noting, “Without the freshwater coming in making the AMOC slow down in the model, we get a simulation with much better, lasting agreement with the temperature data from the climate record,” He says. Adding, “The important result is that the AMOC appears to be less sensitive to freshwater forcing than has long been thought, according to both the data and model.” Read more.