For Nelson Institute alumnus Steve Hopkins, pursuing a career in environmentalism was an easy choice. Hopkins grew up learning about animals, gardening, and the outdoors from his grandparents who had a cattle farm in Missouri. He credits his grandparents with introducing him to his passion and ultimately leading him to his current position with the Iowa Department of Natural Resources (DNR).

After obtaining his undergraduate degree at Luther College in Decorah, Iowa, Hopkins continued his education at Nelson Institute, earning his master’s degree in land resources.

“I was drawn by the interdisciplinary nature of study at the Nelson Institute. As a land resources major, I was able to study both science and social science in researching the impacts of agriculture and agricultural technology on the environment,” he said.

Hopkins was also a member of F.H. King Students for Sustainable Agriculture, an organization named after the late University of Wisconsin- Madison Professor and author of Farmers of Forty Centuries. The collective aims to connect with the Madison community through agricultural land and food while advocating for sustainability. They also host several educational programs, workshops, and events for the community.

Additionally, Hopkins earned research grants from the Center for Rural Affairs in Nebraska and from the Wisconsin Rural Development Center.

“I owe many thanks to Herman Felstehausen, my major professor who helped steer my grants through the UW system and for helping develop my thesis topic. I also owe thanks to Dennis Keeney and Jess Gilbert who, along with Herman, made up my thesis research committee,” he says.

For the past 13 years, Hopkins has worked for the Iowa DNR as a nonpoint source coordinator.

“Nonpoint source pollution refers to runoff from the land, which includes runoff from farm fields, from urban streets, from residential yards or any other type of runoff not being discharged through a regulated pipe or point source,” he said.

Hopkins oversees the Nonpoint Source Management Plan for the state of Iowa while also managing the Section 319 grant program.

Section 319, created from a 1987 amendment to the Clean Water Act, is a program that awards grants from the Environmental Protection Agency to states, territories, and tribes focused on creating nonpoint management plans to assist in the clean up of lakes, rivers, and streams. These statewide projects can help reduce nonpoint source pollution.

“We administer a Section 319 grant of approximately $3.7 million annually, which is used to fund projects that leverage three to four times that amount of funding through other funding sources. Most of those projects fund a watershed project coordinator who works directly with landowners and farmers in a watershed to implement a watershed plan, and fund a variety of conservation practices targeted to address the pollutant causing an impairment in a lake, stream, or river segment,” Hopkins said.

He is also part of an ongoing watershed project focused on installing creek signs in priority areas throughout the state of Iowa. Hopkins explained that while many state citizens were concerned about water quality in Iowa, many didn’t know the name of their local creek or how it contributed to nonpoint pollution.

“One of the first steps we can do is to simply make them more aware of their creeks, especially in the watersheds where we’re trying to restore the creek or a lake that the creek drains into. If they know the name of their local creek, they are more likely to care about it and change their behaviors and actions to help restore it,” he said.

The project began in 2014 and uses Section 319 funding in conjunction with the Iowa Department of Transportation to place creek signs at bridges on state and federal highways. Several of the signs also include the name of the lake they flow into to show locals the importance of creeks and how they affect the lakes they swim, boat, or fish in. Since the project began, nearly 1,000 signs have been installed throughout Iowa. 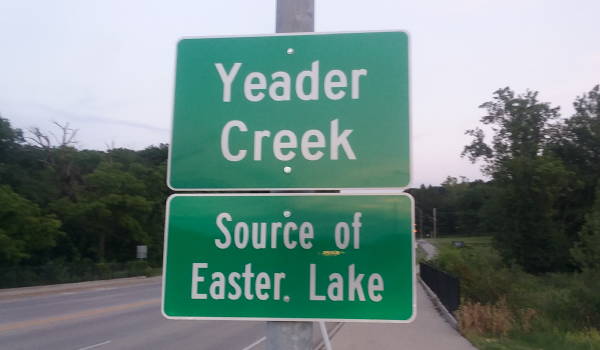 Hopkins is working on yet another project to increase awareness of local creeks, however, this one holds a special place in his heart.

Hopkins recently assisted a biology class at Newton High School, in Newton, Iowa, in their efforts to change the name of their creek from Sewer Creek to Cardinal Creek, the name of the high school’s mascot. Hopkins also helped the school implement creek monitoring as part of their regular curriculum.

“Our family lived in the Newton area for 25 years, and my sons both graduated from Newton High School, so I had a personal connection to this project,” he said.

Hopkins explained that the stream flowed next to a popular path where many people from the community hiked or biked. By changing Sewer Creek, and the negative connotations that came with it, to Cardinal Creek and putting up creek signs, Hopkins, along with biology teacher Courtney Wolken were able to create a new sense of pride and awareness for the creek among local community members.

“That’s what we hope for, for all of us—to become more aware, to care, and to take positive actions to improve our local environment and community,” he said.

In 2019, Hopkins and Wolken presented the Cardinal Creek project at the Soil and Water Conservation Society’s annual conference in Pittsburgh, Pennsylvania and were given the Iowa Environmental Council’s Youth and Tenacity award for their work involving and inspiring students. 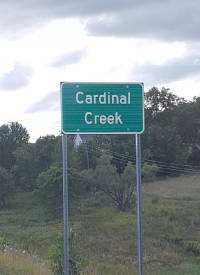 When he’s not working hard to implement watershed projects or giving back to his local community, Hopkins is reaping the benefits of his own work by canoeing and fishing Iowa’s rivers and streams or enjoying the outdoors with his family.

Hopkins and his wife Sara, have even been commended for starting one of the first dairy farms in Iowa to use ‘intensive rotational grazing,’ meaning that cows are moved to different areas of the farm twice a day to improve vegetation and soil sustainability in the surrounding area. Their efforts were featured in Successful Farming magazine in 1993 and in the book Farmers for the Future by Dan Looker.

Reflecting on his time at UW–Madison, Hopkins hopes students of the Nelson Institute carry the Wisconsin Idea of research, service, and leadership into all parts of their lives moving forward.

“I’d encourage students to do as much as possible to stay engaged with each other and with the Nelson Institute faculty and staff while they’re in Madison, because they can take what they’ve learned to the other places they go to in their careers. I’d also encourage them to, wherever they go, become involved in learning about their local environmental issues, to study them closely, and to not be afraid to become involved in efforts to make their communities better,” Hopkins said.

Hopkins was recently featured on the Iowa DNR’s webpage for his blogpost about The First Earth Day and his connection to Nelson Institute.