Professor of Atmospheric and Oceanic Sciences (AOS) and Nelson Institute Center for Climatic Research (CCR) affiliate Jonathan E. Martin has published a book that highlights the career and work of Reginald Sutcliffe. The book, Reginald Sutcliffe and the Invention of Modern Weather Systems Science (Purdue University Press), discusses Sutcliffe’s role in developing modern dynamical meteorology, which is the study of air motion that is associated with weather and climate.

Martin describes the inspiration and process behind the book. 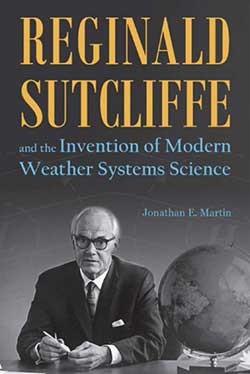 “Less than a century ago, a forecast of the weather for tomorrow or the next day was generally considered a practical impossibility. During the intervening decades a remarkable revolution has taken place such that today a weather forecast out to five or so days is so routinely accurate in its broad contours as to be taken for granted. This revolution is partly the result of the pursuit of deeper theoretical understanding of the atmosphere.

Just after receiving the news that I would be joining the faculty in AOS, I began to put my notes together for my first AOS 452 course to be taught in fall 1994. As I did so, I gradually became aware of the fact that Reginald Sutcliffe had almost single handedly developed modern dynamical meteorology as it pertains to the study of synoptic-scale weather systems. Sure, there were others of great note — Sawyer, Eliassen, Petterssen, etc. — but no other single individual seemed to have made more fundamental contributions on the dynamics of weather systems than Sutcliffe. Despite this apparent truth, it seemed that his reputation was of substantially lower profile than his contributions.

Nearly 20 years later, I took my first sabbatical leave. I spent the year researching and writing a cradle-to-grave biography of this underappreciated luminary in our science. Thus, in fall 2014 I began what would eventually be a six-year project that resulted in Reginald Sutcliffe and the Invention of Modern Weather Systems Science, which was published on March 15. The book details Sutcliffe’s life and his ideas, but also illuminates the impact of social movements, and the larger forces that compel them on shaping his consequential life.

The book makes the case that three important advances guided the development of modern dynamic meteorology that led directly to the astounding progress in weather forecasting and that Sutcliffe was the pioneer in all three of these foundational developments. In an age where nearly everyone can cast a quick glance at a mobile phone to acquire accurate weather forecast information, where responsible governments seek scientific answers regarding the likely ramifications of global warming, and where an enormous fraction of the global economy depends on the current and future weather, Sutcliffe’s story is timely. It is my hope that shining a light on Sutcliffe’s life and work will, in some way, inspire a renewed appreciation for the human dimension in progress and the rich legacy bequeathed to societies wise enough to fully embrace investments in education and basic research.”