If he’s being honest, Paul Robbins isn’t in love with the cover of his newest book. The top half is fine — Environment and Society: A Critical Introduction (Third Edition) by Paul Robbins, John G. Hintz, and Sarah A. Moore — it’s the bottom half that gives him pause. A sea turtle floats along a reef, towing behind it a clear plastic sheet that dances in the current. The book is about the intersections of the environment and society: two categories that the book says are “interlaced and impossible to separate.” The cover’s sea turtle represents the environment, but what represents society? “Plastic,” Robbins says pointedly. “Kind of a downer.”

It was important for Robbins and his coauthors that this book not be a downer; in fact, it was the book’s raison d’être. “The first step [of the process] is to become dissatisfied with what exists. We’ve all taught this class in one form or another: Environmental Issues or Intro to Environmental Studies,” Robbins says. Hintz is a professor at Bloomsburg University and Moore is an associate professor here at the UW. What the three of them found was that the book they wanted to teach simply didn’t exist. Too many textbooks focused on problems, not solutions; hows, not whys. “It’s just a litany of misery,” he recounts. “Not that these aren’t important problems that people need to understand. I totally agree. I taught that book for a long time. But it doesn’t really say anything about solutions.” 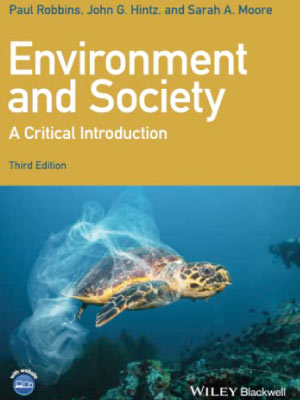 Since its first edition, Environment and Society operates in two parts: “approaches and perspectives” and “objects of concern.” Or, as Robbins puts it, whys and things: “Trees and wolves and bottled water and e-waste. Not problems,” he explains. “Things.” Other things include lawns, uranium, and French fries. On the quest to not write a downer, Robbins, Hintz, and Moore intentionally moved away from a problem-first view. “This is intended as an opportunity to break away from the environment as an undifferentiated generic problem, one universally characterized by a state of immediate and unique crisis,” the book reads. “We do indeed face enormous environmental problems, but we believe them to be best solved by exploring the specificities and differences, as well as commonalities, of both people and things.”

Two of the whys that are new to the third edition of Environment and Society are “Feminism and the Environment” and “Racialized Environments.” “I can’t believe those two were not in the first edition,” Robbins says, reflective. “It is with great embarrassment that I tell you that those chapters were not in the [first] book.” While the first edition took less than a year to complete, the third edition took much longer; Robbins and his coauthors took great care in crafting the two new chapters. “We wanted to get those right,” he emphasizes.

Talking to Robbins about the new edition feels different than you’d expect talking to a professor about their textbook might feel. He and his coauthors have taken an enormous subject that is often charged with doom-and-gloom and turned it into an accessible, hopeful book. Perhaps that comes from Robbins’ go-to imaginary audience: a retired Air Force colonel. “Somebody who, one, may or may not be politically sympathetic to my views. Two, super smart, but not an academic,” Robbins says.

Academics and non-academic readers alike are encouraged to think of the chapters as individual modules, rather than a start-to-finish read. Curious about COVID-19 and the political economy’s implications on the environment and society? Start with chapter seven. Craving a brief history of the French fry? Dig into chapter 18. Environment and Society is a toolkit, not a lesson plan, which allows teachers to customize their class experience.

Robbins doesn’t get the chance to teach his book — “because I’m sitting here dean-ing,” he half jokes — but he hopes readers will walk away with new ways of thinking about environmental problems. “I think that it will give you some optimism that there’s ways to solve these problems,” Robbins says. “I think it’ll empower people to think about the environmental problems as social problems that can be addressed. They’re solvable. It’s not too late.”