In early March, a couple hundred gathered at the Pyle Center on the University of Wisconsin–Madison campus to participate in a graduate student conference highlighting social and environmental justice. The conference was hosted by The Center for Culture, History, and Environment (CHE), a Nelson Institute program consisting of interdisciplinary students and scholars who explore environmental change through historical and cultural contexts.

The conference was titled, “Environmental Justice in Multispecies Worlds,” and featured interdisciplinary researchers, graduate students, and local activists and experts who discussed topics including climate justice, Indigenous knowledge, settler colonialism, racial capitalism, and decolonization. Over the course of three days, the conference hosted programming including panel discussions, lectures, writing workshops, and roundtable discussions, all centered around the idea that social and environmental justice are fundamentally connected. 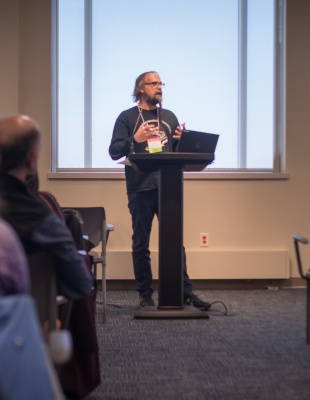 The conference’s theme grew out of a research group, also named Environmental Justice in Multispecies Worlds, that was initiated several years ago by members of CHE. Elizabeth Hennessy, professor of history and environmental studies at UW–Madison, is a co-director of the research group and organized the conference along with a team of over 14 graduate students.

“Our research group asks how best to live in ‘multispecies worlds,’” Hennessy said, “by which we mean learning from Indigenous and other non-Western worldviews to find ethical and just ways of relating to and caring for the many other species with whom humans share the Earth.”

Hennessy said the conference was an opportunity to imagine what forms multispecies justice might take in different places, and understand what challenges need to be addressed in order to achieve racial and environmental justice. At the same time, Hennessy said the conference provided an opportunity for UW–Madison graduate students to feature their work alongside other prominent environmental justice leaders.

“The goal was to highlight the research our own students in Madison are doing on environmental justice and help to connect us with scholars and activists from other universities and communities invested in similar issues,” Hennessy said. “Our grad students put so much effort into pulling the conference together, and it was wonderful to work with them.”

Laura Perry, who recently graduated with her PhD in English from UW–Madison, has been a member of the Environmental Justice in Multispecies Worlds research group since it began and said that she was “particularly excited” to be an organizer of this year’s CHE graduate student conference. She also expressed her gratitude for the UW faculty and staff who made it possible for graduate students to be recognized as valued contributors to the project.

“At every step of the way, they prioritized student research,” said Perry. “Grads were equal partners at the table with faculty and staff in decisions and discussions.”

In addition to serving as conference organizers, graduate students also contributed as panelists, discussants, and presenters. Several essays written by graduate students were featured in the conference’s four writing workshops, while other students had the opportunity to present their work in panel and roundtable discussions.

Lupe Remigio Ortega, a PhD student in the Composition and Rhetoric program at UW–Madison, was one of eight graduate students who present their essays at the conference’s writing workshops. During these workshops, writers had the opportunity to share their work with students, professors, and scholars, who engaged in discussion and offered their feedback.

Remigio Ortega’s essay, “The Return to La Mixteca: Mixtec Forced Migration as an Issue of Environmental Justice,” draws from her family’s Mixtec history to address how forced migration, displacement, and cultural suppression are forms of both social and environmental injustice.

Remigio Ortega’s work is inspired by the story of her parents, who are from San Miguel Cuevas in Santiago Juxtlahuaca, Oaxaca, one of the three states incorporated in the region of La Mixteca, Mexico. In the mid 1980s her parents were forced to leave La Mixteca, and now they reside in the United States, where economic suppression and immigration policy prevent them, along with many other Mixteca immigrants, from returning to their ancestral land. This, Remigio Ortega said, poses a threat to Indigenous culture and identity development.

“The land is not just the land – it’s part of who we are,” said Remigio Ortega, explaining that Mixtec people have a strong cultural, spiritual, and reciprocal relationship with land.

The connection between culture and the environment was a central theme discussed at the conference, and Remigio Ortega said it gave her the opportunity to explore many of these ideas for the first time.

“[The conference] gave me the opportunity to redefine what environmental justice is,” said Remigio Ortega. “As a scholar, I’m trying to reconnect with my Indigenous roots… This was really the first time that I started to think about land and [the significance of] the relationship between the Mixtec as a people and the land.”

Also discussing issues regarding land and environmental justice was Carly Griffith, a PhD candidate in the UW–Madison Department of Geography. Griffith served as a co-organizer of a panel that discussed the ways in which law and regulation impact issues regarding land and resource ownership. Through this panel, she had the opportunity to present her own work, which highlights the history and impact of property and mineral law in the northern Great Plains.

Griffith’s presentation explored the legal disputes over natural resource ownership between states, tribal governments, and private citizens. She also gave special attention to the historical context of settler colonialism, which she said is central to discussions around environmental justice.

As a part of this historical focus, the CHE conference also sought to amplify voices from Wisconsin Native Nations. For this, Sheamus Cavanaugh, a PhD student in the Nelson Institute for Environmental Studies and the Anthropology Department at UW–Madison, organized a panel of three Tribal members who shared their experience, knowledge, and expertise regarding environmental justice.

Inviting Tribal members to speak at the conference corresponds with a concerted effort by the university to foster lasting and respectful partnerships with Native Nations. Cavanaugh relied on a network of Tribal members he had met at previous CHE events to coordinate the panel. Invited guests included Ziigwanikwe (Katy Bresette), of the Red Cliff Band of Lake Superior Ojibwe, Gidigaa bizhiw (Jerry Jondreau), of the Keweenaw Bay Indian Community, and Anahkwet (Guy Reiter), of the Menominee Reservation.

Although Tribal members have not always been a focal point of CHE events and programs, Cavanaugh said that there has been a greater effort in recent years to amplify Native voices, which he sees as essential for building respectful partnerships with Native Nations.

“Lately, the UW has made a concerted effort to be a better partner with Native Nations,” said Cavanaugh. “Part of that effort includes highlighting Native experts and being receptive to and respectful of that expertise… The response to the Native Nations panel was profound… This discussion was a vital and necessary component of the conference.”

Looking to the future, conference organizers remain hopeful that they can build off the success of the conference by continuing discussions around environmental and social justice, while also continuing to build the foundation for tangible change.